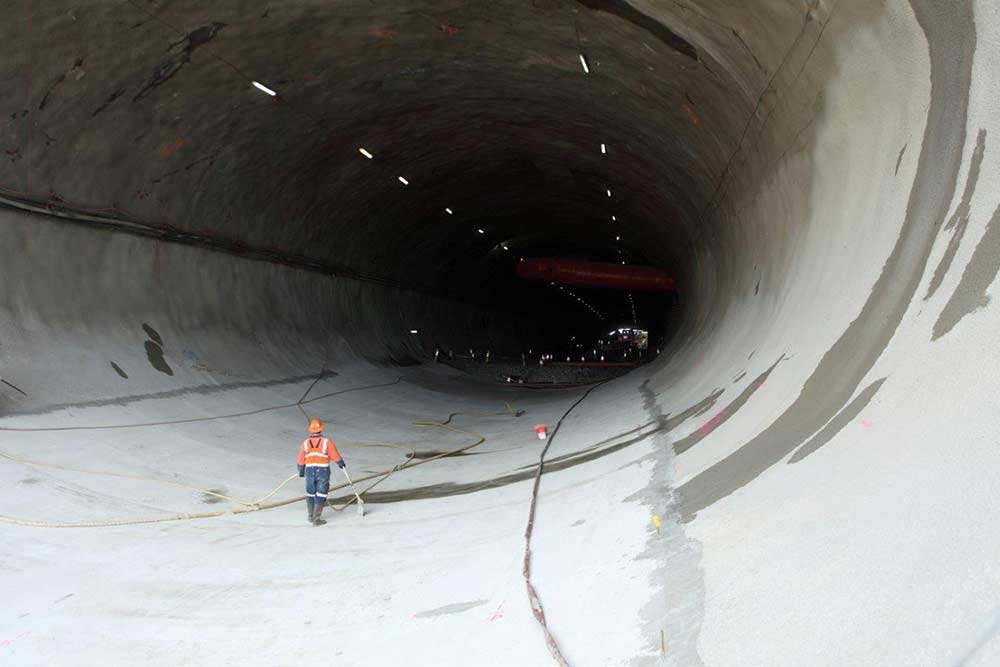 The Tintenbar to Ewingsdale Pacific Highway Upgrade Project consists of the realignment of 17 km of the Pacific Highway from the Byron Bay turn off to just north of Ballina. Due to the terrain the existing road has a number of sharp bends and hilly making it a blackspot with several fatal traffic incidents every year.

The Byron Bay/Northern Rivers area is one of the most environmentally sensitive areas in Australia so key factors of the design of the new highway were the environmental and visual impact it would have. The designers managed to neutralise most of the hills and gullies to provide a smooth road alignment apart from St Helena Hill at the northern end of the project. The preferred option with reduced impact was to build twin tunnels 400m long and 18m wide at a depth of 40m under the peak of the hill. Geological testing found the rock to be very hard so Drill and Blast method was most appropriate.

Excavation
• Used some of the first Leica MS50 Multi stations in Australia. This is essentially a traditional total station with scanning capabilities. As it can store 1000 points per second we were able to get an accurate pick up of the irregular excavation surfaces allowing us to account for every protruding rock for volumes and conformance.
• With the scanned surface we were able to accurately calculate shotcrete (concrete) volume taking into account any overburden with a 20 minute processing turn around.
• The scanned surface also enabled us to check that they had achieved the full design thickness of the shotcrete before starting the next advance.
• Calibration and maintenance of the navigation system for the drilling rig for the drill and blast face. By accurately calibrating the navigation system we were able to find the fine line to minimise over-break (reduce the amount of extra shotcrete) and minimise under-break (extra time spent manually hammering out the profile)
• Most survey reporting software cannot deal with tunnel data as it only gives a vertical offsets instead of reporting perpendicular to the surface as is expected for tunnels. Lynton Surveys has written their own custom built software for reporting conformance and thicknesses.
• The nature of surveying in tunnels means you have a hanging traverse until you can close off on the other side. The breakthrough results of: N0.012 E0.008 Z-0.006 was well within acceptable limits.

Monitoring
• Over 600 monitoring points that were routinely observed to quantify the convergence and subsidence movements.
• Additional monitoring techniques such as crack monitoring and exo monitoring,
• The Invert concrete lining blocks ended up floating due to underground water pressure build up. Some blocks rose up to 190mm and we monitored how much they had moved and confirmed that they went back to their original position after core drilling them.

Concrete Lining
• 47 invert pours and 47 arch pours per tunnel each block being 10m long. Initial our cycle took a week but it didn’t take long to iron out an efficient system and were soon doing a 24 hour turn around.
• 33,000m³ of concrete was placed in the invert and arch with strict cover to reinforced steel. We come up with a streamlined system to ensure the steel fixers were able to build the curved shape of the tunnel to a steel tolerance of 20mm.
• The arch pour used a gantry that was moved on rails. We surveyed and confirmed it was the correct shape and calibrated it with some survey marks so that it could be set into position quickly and within the 5mm tolerance.
• With our in-house Tunnel Conformance software we could prove thickness of concrete, cover to steel and conformance to design which reduced the workload on the project engineers.
• In order to speed up construction we were able to set-out the cut and cover walls rotated and flipped on its side so that the steel fixers could construct the steel faster and in a safer manner.

Pavement and Drainage
• Footpaths and ramps leading into the cross passages and sub stations had to be set out with tight tolerances as to not to exceed any maximum grades for wheelchair access.
• Pavement layers conforming to design and required thickness layers to RMS standards and tolerances
• Barriers

Fit out
• Setout of over 10,000 bolts/droppers for ventilation, fire services and electrical and - identity any clashes early so the issue can be addressed.
• Ensuring services/ventilation is outside of the traffic envelope to avoid any clashes with traffic once the tunnel opens to the public.
• The substations and cross passages needed to have equipment set-out in the right location as a lot of it was prefabricated components that had to fit back together exactly.